Today we woke up early and had breakfast at or hotel before heading over to the Blue Mosque. With our head scarfs on and shoes off we went inside. The ceiling is absolutely beautiful- I don’t think my camera moved from the upward position the entire time we were inside.

next we went to the Hagia Sophia, which was also beautiful. 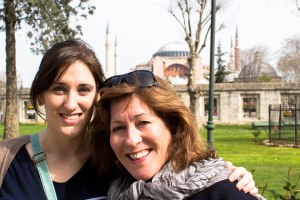 Then we went to the Basilica Cistern-this was my favorite thing we saw all day. It was so interesting and cool. It was like nothing I’ve ever seen before! 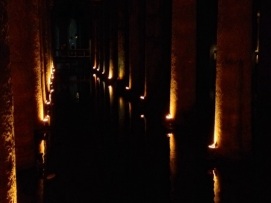 Later we went to the spice market. This was such an experience. I wish I could buy just about everything in there. There was spices, candies, teas, soaps, trinkets, souviners, etc.
next we made a quick stop for tea and coffee. Aunt Laurie tried some Turkish coffee, mom had tea and I had lemonade with mint. The Turkish coffee was interesting to say the least. It pretty much tasted and looked like mud. My lemonade was delicious though.

Next we met up with a former coworker friend of my aunt Laurie named Ezra who is Turkish and lives in the city. She was so sweet and offered to take us around and show us the Bosphora area of the city. We walked around and she suggested we try some street food so we got these things that are essentially loaded baked potatoes. They were piled high with cheese, corn, olives, peas, bulgar wheat salad, and meat. It was so different but so yummy. After we went and had some Turkish wine and sat by the water. Then we went and walked around looking at all the street vendors. Visiting this area really gives you a different opinion of Istanbul. On this side of the city it feels much more modern. 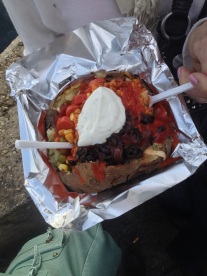