This weekend started out great when we got out of Sevario’s class a whole 30 minutes early. We then took a train to Milan that arrived late and we almost missed our train to Switzerland. Once the train started rolling I reached for my bottle of Sprite I had brought from the Villa. Apparently the combination of the train ride through the mountains and me running through the train station had made the bottle build up pressure, because as soon as I began to twist the cap off, it shot off bouncing all around the train car. Everyone screamed and was looking at me as smoke rose from my bottle. We all started laughing after we realized what had just happened. Everyone else on the train was not amused by my exploding water bottle. I’m pretty sure they thought I had a bomb or firecracker or something.
Once we arrived in Luzern we checked into our hostel, which is apparently a Korean hostel. They informed us that our included breakfast was oriental style fried rice. We went out for dinner and then planned our next two days here in Luzern. Saturday consisted of going into town walking around the old city and the most photographed landmark in Switzerland, Chapel Bridge. 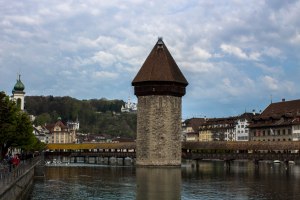 We went to see the famous Lion monument and then rented a paddle boat and went out on the lake. It was so beautiful and clear you could see to the bottom just about everywhere. The lake is also filled with swans, which was so cool!

Afterwards we had a picnic lunch by the shore and then went to Mount Pilotus. To get to the top of this 7000 ft peak, we had to take two separate gondolas. On the way up we saw sheep, cows, and the real life Ricola man blowing his big ass horn on the mountainside. The whole trip took about 30 minutes total. Once we were at the too it was about 20 degrees colder than down below and there was still snow covering the tops of the peaks. We went out to the roof of this building that had panoramic views of the city and the Alps. We even climbed a little higher to get some better pictures until it started to hail and we went back inside. The views from up at the too of the mountain were insane.  It was probably one of the most beautiful views I’ve ever seen. 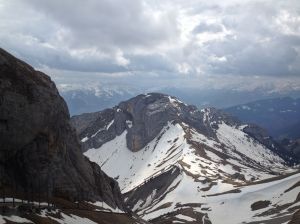 On the ride down the boys saw some paragliders floating down off the mountain and decided they wanted to do that, so they booked it for the next day.
Sunday morning, the girls went exploring the old city while the boys went paraglyding. We saw some cool old city walls and towers and most excitingly, some yaks!! They were so cool and hairy! 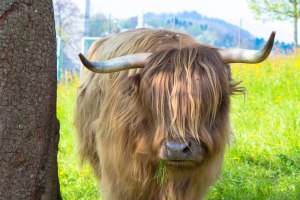 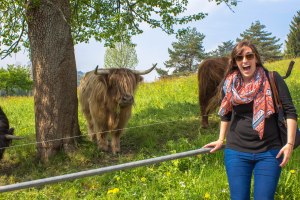 When the boys were back on solid ground, we went to the grocery store and bought stuff for lunch. We then went back to the paddle boat place to rent a motorboat which we took out while we had our picnic lunch on the lake.  All they asked was if we knew how to drive a boat and if we could swim-super legit.  Afterwards we came back to the hostel and laid out on the balcony on the hostel in the sun. It’s crazy laying out tanning which you can see snow covered mountains in the background. We went back into town and grabbed dinner and took it to a park by the lake and ate. I’m just now realizing we didn’t sit down in a restaurant this entire weekend-all our meals we are outside at the lake. We then got ice cream and watched the sunset over the mountains. What a great ending to a perfect weekend. 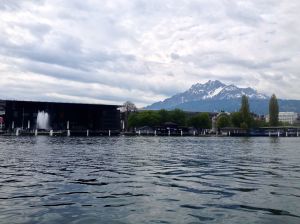 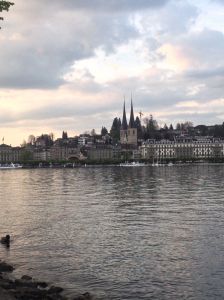 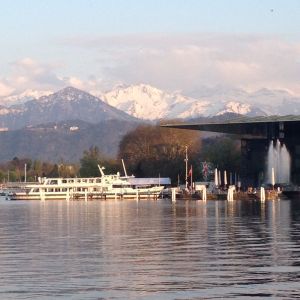 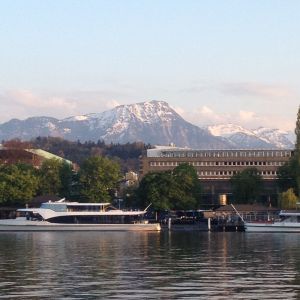